After a long and intense professional career as a dancer and performer, Louise Chardon (Lou) develops further her life path through somatic practices enhancing spiritual growth and self-inquiry. For more than 30 years, she dedicates herself to the study of being (in) motion. She specialized in listening to the profound sensitivity of the self and how our subconscious manifests into our embodied nature. She mainly applies her researches to her visual and performative art and shares it through her pedagogic and therapeutic approaches which she defines as Embodied Philosophy & Energetic Physiology.

Luk Van den Dries has devoted his life to the study of theater. Theater is a place where people and communities are healed. It shows the vulnerability and fragility of people, allows us to fail, and mercilessly exposes our intimacy. Theater shows what is swept under the carpet and what is unauthorized or taboo. Theater airs up because it shows what we all know, but doesn’t dare to say out loud. In many publications (books, essays, articles), he bears witness to his passion for exceptional contemporary theater makers. He specializes in how theater makers shape their ideas and how creative processes on the rehearsal floor contribute to that creative imagination. After a life devoted to teaching and research, he focuses on the art of touch. Introduction to tantra and years of deepening in various tantric inspired courses were decisive in this new path.

Baziel is a young boy of 12 years with a passionate and intelligent physicality. He unfolds his creative drives into the fields of football and sharing time with his friends. He also meets great pleasure in the transmission of his talents.

Maria Julia grew up in Graz in southern Austria, in a big family house where everyone played at least one instrument. Still in kindergarten, she started to play the violin, and later different youth orchestras and musical projects filled her schedule. During adolescence, she switched to voice training and this was the start of a passionate lifetime journey. Her strong musical ambition brought her to baroquian Florence in Italy, with its rich history in ancient music theory and practice, where she studied violin and voice. After an excursion to Vienna, where Intercultural Communication became her main and music temporarily her secondary field of study, she once again fully went for her passion and this time jumped into a more modern way of singing: Musical Theatre. Challenging and deeply transformational times in Vienna and London followed. During her stay and studies in big business London, she felt a strong need to go back to simplicity and felt inspired to write her own songs. Back in Vienna, songwriting and band music kept the passion flowing. A dive of several years into Slam Poetry with spoken and sung word combined, enriched her field of performative experience.

After a phase of depression and deep spiritual process – a pivoting point in her life – she inscribed at the Conservatory of Music in Graz. Recently her heart called her to make a big move and sent her to the for her absolutely unknown Portugal… where in no time she found a simple but warm new home. Here, in A Mandorla, in a nature paradise and close to the amazing Atlantic coast, she is now living with her husband-to-be Indra, with lots of musical experience and love to share!

Indra had a career in the tour operating business, where he founded his own company and managed it for 13 years. It was a period of financial ease and prestige, although the pressure attached to his hectic and materialistic lifestyle, weighed heavily on his health and general well-being.
The pivoting point came in 1989 when he started a daily meditation practice and soon after landed on the Path of Awakening, the start of a long series of deeply transforming moments. He took a bath in the Indian Veda’s and teachings of sages such as Yogananda and Ramana Maharshi. He traveled to live the Inka tradition, went to see Sai Baba in India, did some Philosophy studies, and got inspired by modern science backing up the millennia-old wisdom.
In 2016 he left Belgium for a new life in Portugal and now anchored in A Mandorla, grateful for the hospitality and profound friendship. Here in the yurt, he loves to quietly meditate, contemplate the mystical union, and consciously follow the Divine Flow. As Embodied Consciousness. Since 2021 he shares the yurt with his wife-to-be Maria-Julia.
His highest excitement is to further grow on the Path of Awakening and to share his insights with committed seekers for Self-discovery and -development. 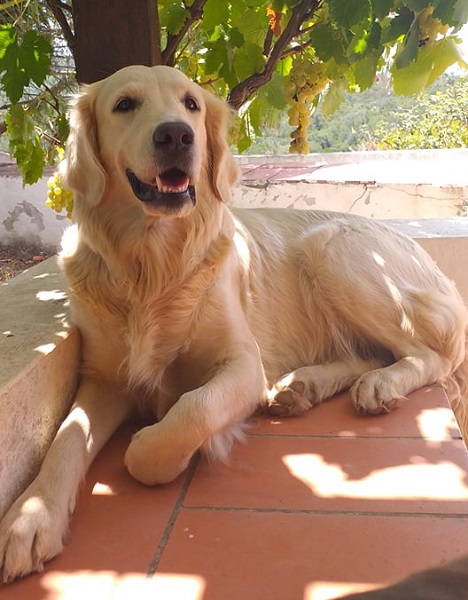 Our loving and beloved dogs and cats, very social and playful.

Link to friends who visited A Mandorla on their personal artistic/spiritual journey.